Types Of Fire Extinguishers: Obviously You Know It 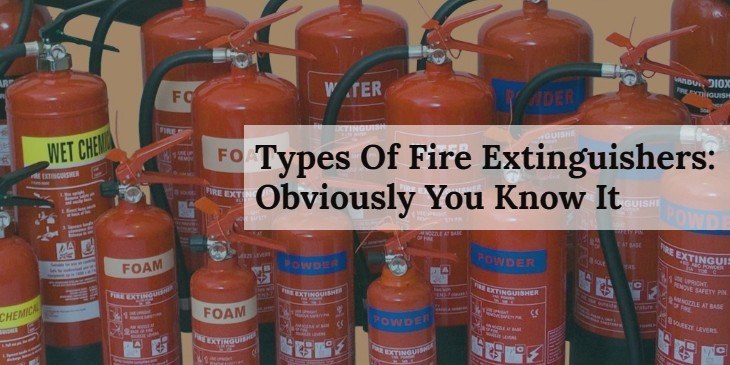 A fire extinguisher is very important and keeping them at home, office, workplace, cars, trucks and the likes. When you have your fire extinguishers in handy, you are most likely ready for any fire breakout accidents. Even though fire extinguishers cannot extinguish out of control fires, it can definitely prevent it from getting to that stage. Unless of course, the fire is already out of control in which the expertise of fire brigade will be required. Fire extinguishers helps to put off start up fire immediately it starts and prevent loss of lives and properties.

We need to understand there are five classes of fire. They include:

Class A: freely burning, combustible solid materials such as wood or paper

Class B: flammable liquid or gas

It does not matter the type or class of fire, there will always be the same four elements present:

The evident theory behind fire extinguishers is that the fire can be extinguished once one or more of these four elements are removed. That is why it is important to aim the extinguisher at the fuel or fire element in a fire accident and not directly at the flames. For each class of fire, the elements therein, the fuel, oxygen, heat and chain reaction is different which is why we have different types of fire extinguishers depending on the fire class. For instance, a class A fire which has to do with solid materials like paper, wood can be extinguished using water however, a class C fire which is an electrical fire cannot because water would conduct the electricity and harm the operator. This can even lead to a serious electrical shock.

As the name implies, the CO2 extinguisher extinguishes Carbon dioxide, it removes oxygen from the fire, effectively suffocating and depriving the fire of oxygen and eventually causing it to die. Carbon dioxide extinguisher is an ideal choice for class B fires that involves flammable liquid and on electrical fires.

Wet chemical fire extinguisher is specifically designed for class K fires, those that has to do with cooking substance like animal and vegetable fats or oil. This extinguisher contain a solution of potassium that effectively launches a pointed attack on the fire.

The liquid mist it expels acts as fire coolant to cool the fire ,then due to the chemical reaction of the solution with the cooking medium, a thick foamy substance seals the surface of the liquid to prevent it from reigniting. The wet chemical fire extinguishers can be used on class K fires in a kitchen setting although it can also be as effective on class A fire which involves burning wood or paper.

The water mist fire extinguisher uses a newer technology that makes it versatile and can handle and control most classes of fire. It releases small water molecules that fights the fire in different stages. First, the fire is suffocated because so much water is ejected in small fog-like form, this causes the level of the oxygen to be decreased.

Secondly, the water particles are drawn to the fire, this allows it to cool and reduce its temperature. The last stage is the most unique, the water is de-ionized, the mineral have been removed. As a result, this extinguisher can be used on class C fire because the de-ionized water cannot act as a conductor. The extinguisher is also effective on burning gases /liqiuds that a regular water extinguisher cannot be applied to. Unique and sophisticated right?!

Clean agent fire extinguisher is a gaseous fire suppressor. It is kept or stored in a liquid form but when released and hits the air, it changes to its gas form which is nonconductive, it is safe to use even when people are around, it is a very clean method of extinguishing because it leaves no residue or remains.

The gas in this extinguisher is composed of Halon, puts out fire by decreasing the oxygen levels and hindering the chain reaction. It is a perfect option for rooms or workplaces filled with electrical and computer equipment or items because it is non-conductive and very clean. They are mostly used on class B and class C fires.

This fire extinguishers are ideal for class A burning woods and papers, the flammable liquids of class B but not effective or good for gaseous fires. Foam fire extinguishers releases a type of foam that expands when it is ejected out of the extinguisher and hits the air then blankets the fire and depriving it of fuel. It also has a cooling effect because the foam is mixed with water. This extinguishers are actually some of the best ones to use on liquid fires, such as gasoline fires, though it can also be used on class A fires.

What Is A Plunge Router Used For: 7 Fantastic Ways You Can Use It