Air Compressor Uses: Must Read To Know And Stay Grasped 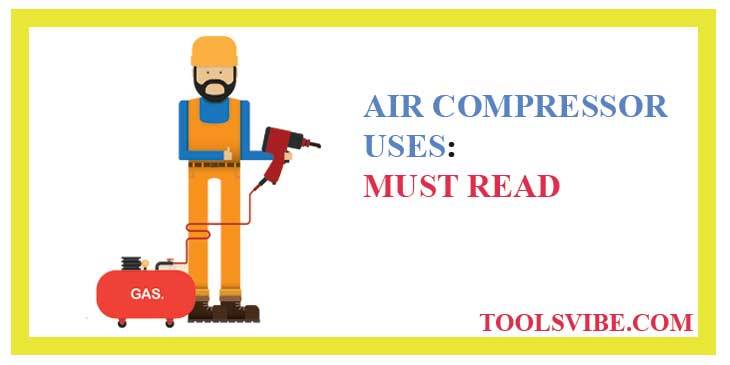 Air compressors are commonly used devices designed for obtaining high pressure gas and forcing its flow. They have a wide range of applications and are available in many different variants. Before buying one, you must gather knowledge about air compressor uses.  Depending on the type of air compressor, it can work great in both industrial and domestic environments. Machines of this type are practically indispensable for the proper functioning of many different devices, tools, installations and systems. Do you know? What is the most common application of air compressor? If the answer is no, then this content provides you a great value.

principle operation of the Air compressor

The compressors increase the gas pressure by sucking the given pressure. Due to the compression process, it is raised to the required parameters. During this process, a significant amount of heat is released. It must be reduced by oil-air coolers mounted on the compressors.

Construction of the air compressors

Air compressors are also very often categorized according to its construction. Positive head air compressor increases the pressure as a result of sucking in and pumping gas in the form of subsequent portions, using the element present in the driven part. There can be distinguished reciprocating piston, screw, spiral, diaphragm or vane compressors, as well as devices with rotating pistons.

Flow models are based on the principle of air flow. The essential element is the rotor, i.e., the aspect rotating at a sufficiently high speed. His work contributes to the generation of negative pressure from the atmospheric air, which is sucked in.

These compressors are used primarily where the high flow rate is the most crucial factor. Flow models are primarily radial, centrifugal, axial and diagonal air compressors as well as Complex devices.

The air compressors usages in Pneumatic

Air compressors in the form of compressors belong to the essential elements of practically all pneumatic systems. They provide them with adequate power supply. In the largest, most complex systems, compressors are effectively combined with one or more tanks. This allows you to collect optimally large amounts of compressed gas. Thus it will enable you to supply it with the entire system.

The advantage of this solution is the ability to ensure a constant inflow of compressed air uniformly, devoid of momentary fluctuations in power throughout the system.

This type of installation works well in large systems that usually operate in a large industrial area – for example, production lines. Compressors can also be used to power slightly smaller versions of pneumatic systems, present among others in small repair workshops or at petrol stations.

Air compressors of this type are used, among others to punch air balls, wheels, boats or inflatable pools. They can also be used in the form of powering household pneumatic tools of any type, including drills, grinders, and nailers. In addition to mobile devices equipped with wheels, in the stores, you can also find more advanced compressors, mounted on ramps or built-in multi-systems.

Some of them are 120 volt air compressors that is more likely used in home and garage. As it provides high pressure so many of home work can be done with this type of tire inflator or air compressor.

Air compressors can be used to clean other machines and devices. They allow, for example, quick cleaning of the mower blades or a chain of a bicycle, thus making it easy to reach even the narrowest nooks and crannies. Contaminants present in hard-to-reach places are then blown out. Many models are equipped with a particular application pistol, thanks to which the work is carried out extremely quickly. Air compressors can also be used for painting under pressure of fences and walls, as well as for renewing furniture.

The distribution of paints with the use of compressed air allows for exact and efficient coating of substrates. In this way, the consumption of color can be significantly reduced, while at the same time eliminating the risk of accidental contamination of the preparation with dust.

Compressors are a fixed element of spray painting kits. They enable the application of enamel on virtually any type of surface, in a wide range of artificial and natural materials.

usages of Air compressors in industry

Compressors are commonly used for professional tire inflation, e.g., at a gas station. This process takes place by pointing to the hose wheel attached to the compressor. The curing industry uses both electric and mechanical compressors. In the first case, they are just pressing the appropriate button, while in the second, it is necessary to pump yourself. Compressors are also used in varnishing plants, where they significantly facilitate the application of layers of preparations for the bodywork. Air compressors are also used in other industrial installations for powering various types of construction machinery. They are also responsible for ensuring optimal pressure in brake hoses.

Very common air compressors are also used in the railway industry. Trains are usually supplied with electricity, obtained from traction. The compressors can also be powered in this way so that the energy supply is continuous. In the case of a helical model, the problems, for example, do not provide a quick air supply to the braking system. In this way, you can not only extend work but also reduce the risk of chafing. The railway also allows for cheap and fast cooling of compressors. This is due to the momentum of the air, which helps to lower the temperature of the devices.

The use of rotary screw compressors

Rotary screw air compressors are used primarily in places where it is necessary to maintain high-quality air and optimal purity. The most restrictive sanitary, technical, and technological requirements have industrial plants, factories, production halls, and more extensive workshops. Screw compressors work regularly, thanks to which they ensure a fast and efficient production process.

The critical parameters of these devices refer to the overall power as well as the dimensions of the equipment. The level of noise emission is not insignificant; however, in industrial conditions, it is not one of the most important criteria.

Screw compressors may use oil for operation or not require it at all. Oil-free models are used primarily in areas where the air should not be exposed to particles of undesirable substances. This applies, among others paper industry or computer industry, where the use of oil could change the properties of manufactured products and negatively affect their quality.

In oil compressors, oil is injected into the chamber in which the gas is compressed. This allows sealing the space between the screws and also cooling the compression element. The oil is thus effectively separated from the air, followed by its cooling and filtration. Then you can use it again. However, the compressed gas must be cleaned of water and oil particles. The filtration takes place by discharging and separating the mixture and then draining it to the sewage system.

Oil-free air compressors work similarly. However, oil injection is not used, which reduces the space between the bolts and reduces the outlet pressure. In oil-free air compressors, different compression elements are used, which allow obtaining a sufficiently high pressure. Helical models use variable flow technology, adapted to the demand based on the outlet pressure indication. They are also called pancake air compressor as they are virtually maintenance free and light weight

The uses of reciprocating air compressors

The range of reciprocating compressors on the market is extensive. The most common are oil and oil-free models, portable air compressors, built-in compressors and compressors on ramps, as well as so-called. Considerable flexibility distinguishes these devices in terms of applications, as well as relatively easy assembly. They are used both in small workshops and powerful industrial facilities. Universal oil compressors are used among other locksmiths like lacquering and vulcanization plants, as well as car services. They are also used to carry out works using pneumatic tools, e.g., grinding machines, machine tools, and sanding machines.

In piston oil compressors, the quality of compressed air is of great importance. These devices are dedicated to applications that require maximum sterility – e.g., in the food and medical industry, in food production and prosthetic and dental surgeries. Oil piston compressors are also used for aerating water and hydrophores.