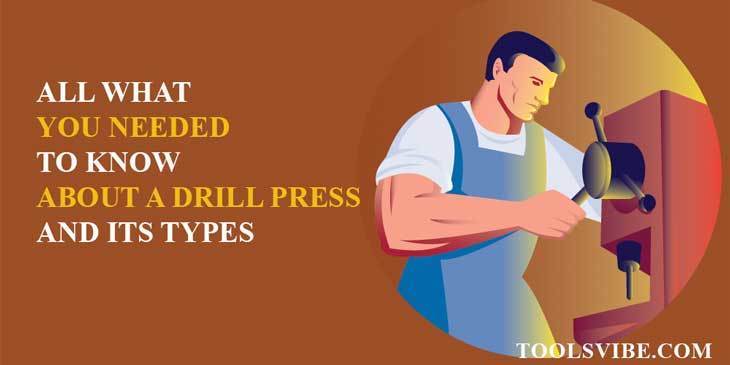 We have been using a drill around our homes to do various wood and metal working job. But what you could do with a drill press, you would definitely not be able do with a drill. These two could be like chalk and cheese sometimes. Hence it is better to do what could be done with either so that you would get your task accomplished perfectly. The drill may be limited in operation. But the drill press is more versatile and could accomplish many more tasks, precisely and easily. Once you get a hang of how to use a drill press you could employ it to do a variety of drilling job easily and quickly like drilling, reaming, tapping, counter-boring, countersinking, and spot-facing.

There are basically two types of drill presses. One which would free stand from the floor with a heavy base at the bottom to ensure that it does not topple over and the other which could be placed on a working table or stool. The latter too would have a heavy base but could have provisions for heavy bolts to fix it firmly onto the table to provide it additional stability.

The floor standing would generally be equipped with a heavy motor. And good enough for more industrialized tasks and the table top would be ideal for home use and for those who would be handling wood and metal work in their free time. Whichever it would be prudent to know what sort of tasks you would be undertaking and then “buy the cloth according to your jacket”, which means that you buy a drill press to be appropriate for the work you would be doing.

It is also imperative that you buy a drill press from a reputed manufacturer who would have a good after sales service and preferably with a substantial warranty. Like any other machinery drill presses are also vulnerable to repair and hence being prepared for the inevitable would be in your better interests. Here I found some basic type drilling machine. which i stated below.

Some other special purpose usage drill press also available like

To Buy your drill press

Once you decide to buy a drill press and actually get one you would find a world of difference between the drill and the drill press. Learning how does a drill press work, would hold you in good stead when you would actually start working with one. Though you may learn from the instructions there is nothing to beat working experience which you would start accumulating as time goes on.

The drill press may not be a very essential tool in your workshop but it is a very handy and versatile one indeed as it would facilitate most of what you would want to accomplish easily and with speed. The major advantage in a drill press is that it could bore precise and straight holes in either wood or metal by using the appropriate drill bits. It could also be used for sanding wood and using your imagination could come handy to do many other things with wood and metal.

Once you have bought your drill press ensure that it is placed if it is a floor standing one or placed on a table if it is a table top in the right place, so that you could work with the minimum of hassle. The drill press would be needed from time to time when you begin on a task, and having it at a convenient location within your workshop would entail lesser movement for you within.

Construction of a comfortable working table or platform

Between the two the drill press is definitely a more sophisticated tool and has many advantages when working with wood or metal. To ensure you are able to work efficiently with a drill press it would be imperative that you construct a working table instead of the standard metal table or platform that comes along with the drill press. This would of course on what type of work you would be attending to, but in any case having a comfortable working table would increase efficiency and speed of operation.

Hence the first thing that you would need to do would be to construct a working table or platform which could be on top of the original metal table so that your newly constructed table or platform is firmly secured to the base of the drill press. Once you have constructed the working platform which should suit your type of work onto your drill press then you should be on your way to perform many tasks which would otherwise be impossible to be executed with the traditional hand held drill.

Setting the speed of the drill press

What is a drill press used for?

A drill press could be used for a variety of job like wood and metal working. Employing different drill bits with the ones suitable for wood and metal you could bore precise holes and as deep as you would need it to be in the context of your task. Holes could be bored at precise intervals and in straight lines or as you would wish. The holes that you would drill could be small to large in diameter and as per the configuration of the drill press that you have bought. 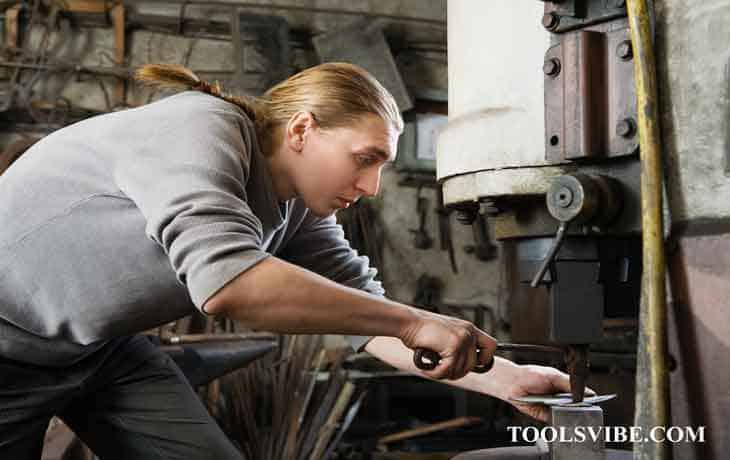 The drill press could also be used for sanding of wood and even metal by using the appropriate accessory. The important thing to understand is that the drill press would always work in a circular motion and depending on the power of the motor you could select for what type of job you would be employing it.

How to remove the drill press chuck?

The drill press chuck could be removed in some models by giving it a hard tap on the top of it from three sides. Whereas in some there is a small lever which you need to push down or up to release the chuck. Before you fix the drill press chuck back ensure that both the inside of the chuck and the outer of the rod that holds it is spotless clean without any grime or dirt.

What does a drill press do?

The powerful motor of the drill press would ensure you get your holes bored on wood or metal without much ado and they would be straight and precise. The drill press would come down from the top which ensures that there is also some force exerted on what you would be necessary when boring the holes. These holes could be bored in any thickness of wood or metal by using the appropriate drill bits.

The drill press could also help by sanding wood and even metal if there are sharp edges. It could also cut out rather big holes by employing the right circular drill bits. Though the drill press would not be the only tool that you would have in your workshop it does quite a lot of tasks around you workshop when needed. It is versatile and would always be a tool that you would have to operate to get all those small issues sorted out.

What is a drill press swing?

Larger the drill press swing the further that you could bore the hole and when the swing is shorter the distance reduces. Hence when you buy a drill press you would need to know what your requirements are and then purchase appropriately.

How to use a drill press vise?

The drill press vise is used to clamp and hold the wood or metal that you would be working on. It ensures that by holding it firmly in place it would be easy to work and also be safe when the drill press is operating. A loosened would or metal could cause injury and also be impossible to work on.

The drill press vise is an important accessory that you would need to keep beside your drill press as it would be useful and is employed quite often when working on a drill press.

How does a drill press spindle work?

The drill press spindle is inside the quill and the one that holds the chuck in place. The chuck is fitted on to the spindle and when it loses its straightness due to undue pressure on the chuck whilst operating it could damage the spindle which would then need to be replaced. The spindle should be ramrod straight for the chuck to work at optimum efficiency.

What is a radial drill press?

A radial drill press could be moved around in an arc or radial movement. Here it is the column, arm and the drill head which would swing around and would create an easy to work environment depending on the type of work that you would undertake. The radial movement is advantages to execute some very complex tasks and would generally and adjustment in larger drill presses.

What is a drill press quill?

The quill holds the spindle inside it and acts like a guidance ensuring that the spindle maintains its straightness. Without the quill there would be undue pressure on the spindle which could bend and then wobble the chuck. The spindle, quill and chuck are all in one fitting and when you need to replace any one of them the complete contraption has to be removed.

Together they ensure that the drill press operates without any flaws and does not cause any wobble or unnecessary deviations and errors. It is imperative that you check the quill, spindle and the chuck often or when you find any slight variations in the settings and the final result. It could be due to issues in either of the three. In most instances it would be the spindle that would give way rather than the quill and the chuck.