Scroll Saw Vs Band Saw: Which suits Your Needs? 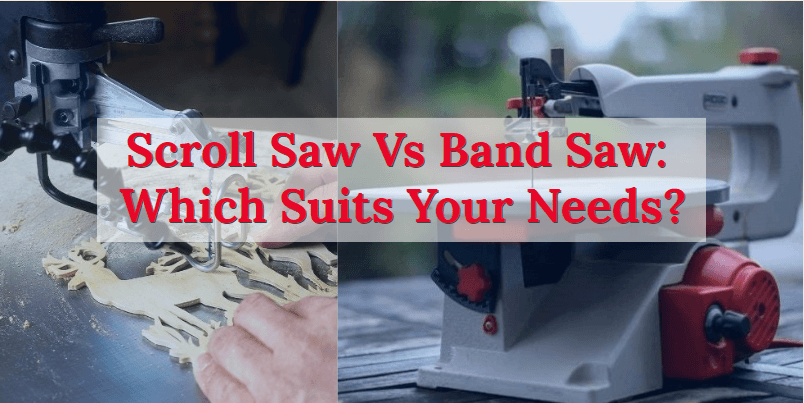 If you own a wood-shop that needs an additional gadget, and you want to decide between adding a good scroll saw or a good band saw, you’re probably going to need to make a comparison of these two. This article will help you look at what a Scroll saw is and does, as well as what a band saw does. This should help you make a more informed decision.

Scroll saws have been around for a long while (since the 1500s) than the band saws, which came about in the early 1800s. These two saws have been used in creative woodworking ever since then, and they’ve both contributed immensely to different types of carvings and woodwork.

Therefore, the best way (and the only way really) to male the right choice of which of these saws to add to your wood workshop is to determine what exactly you want to achieve by the addition. Now let’s look at each of these saws

The scroll saw comes fitted with a small and narrow blade that is vertically mounted and anchored at the top and the bottom of the device. To cut through woods with the scroll saw, you will have to set the engine to a particular speed or control the blade with a foot pedal as it moves up and down to cut the wood.

The Use Of Scroll Saw

If you intend to make small and detailed designs and cuts, the scroll saw is probably your best bet. Dollhouse furniture, jigsaw puzzles, inlays, ornaments, etc. are examples of designs that can be made with a scrolls saw. You can even make a paper pattern and place it on the wood to serve as a guide while cutting out the designs or draw out the models on the wood and carve them out.

The narrow and small blades of the scroll saw makes it possible for it to make shapes flexibly and even enter tight corners to create very smooth and precise cuts.

Scroll saws are noiseless, user-friendly, and they create less dust. Plus, you can easily change the blades on your scroll saw. They are very safe tools that can be easily operated by children, making them very good to introduce children to woodwork.

With a scroll saw, you can pierce through your woods. You can slide the wood under the saw’s blade, poke the blade through and reattach it underneath the wood to trap the blade inside the wood, and make hollow designs. Once the cut is done, you can detach the blade and raise it off the project.

With a scroll saw, you can materialize your imaginations with a high level of intricacy. You can make the smallest of cuts with your scroll saw and bring out all the details of your vision. If this is what you’re looking for in a saw, your best bet is a scroll saw.

A band saw relatively, is larger than a scroll saw. With two large wheels, rotating, vertically oriented, and flexible metal blades, your Band saw takes the appearance of a bicycle. The Band saw possesses a motor that turns the wheels, and causes the blade to rotate at a very rapid speed.

The blades on the saw come in different sizes and types that allow you to match them to your particular need at the moment. With a band saw, you can even make cuts of metals. To make cuts with Band saws, you use your two hands to push the wood past the rolling blades in a straight line, at angles, or curves, as dependent on the type of cut you want to make.

Use Of The Band Saw

Regardless of your wood’s thickness, a band saw will do the job of cutting quite effectively and efficiently. Curves, perfect or imperfect circles, irregular designs, straight cuts, etc., whatever your cut and design aim, with a band saw, you get it done and done pretty well for that matter.

Furniture makers use band saws to make carved legs for their table designs, beds, and chairs. You can use a band saw in the place of table saws to cut through boards more safely and faster.

You can get a band saw that can cut woods at a height of as much as 12 inches and even above (up to twice that height). You can resaw boards into smaller thickness with a band saw with speed and amazing precision.

If you intend to make cuts from woods that are thick (like lumbers), then the choice of saw to add to your workshop is the Band saw as it does a lot of thick wood cuttings at an outstanding speed without substituting it for quality delivery.

Generally, a band saw will cost more than a scroll saw because they are bigger and more complicated, and they also handle more massive projects than scroll saws. However, the two types of saws are in their way, and with their uses reasonably priced if you get them from the right vendor.

These saws, even though we’ve run a comparison, are not interchangeable and do not do the same work. The scroll saw is used to make small, intricate, and detailed designs while the Band saw will be good for larger projects like the design and production of furniture like chairs, tables, and so on.

If you, however, will like to do both of these types of designs and can afford to own the two machines, then they will be an excellent addition to your workshop.

How To Use A Band Saw: A Definitive Guide By Expert